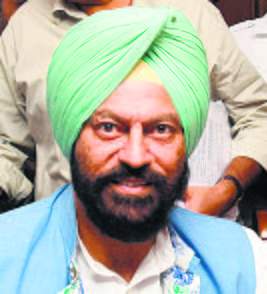 I have every right to claim genuine compensation for my ancestral property. I have won cases right up to the SC and have full faith in the legal system.

The issue has surfaced at a time when hundreds of farmers are protesting to get compensation enhanced to Rs 70 lakh from Rs 45 lakh per acre for their prime land being acquired for the Delhi-Katra highway. Party leaders said not only were Opposition parties gunning for the minister in the run-up to the 2022 Assembly elections, but they would now question newly appointed

An inter-departmental committee under the Chief Secretary had in 2020 indicted the minister for taking double compensation for land acquired at Mohan Ke Uttar village in Ferozepur during the previous SAD-BJP government in July 2014.

The probe questioned the role of a PWD official as well as revenue department officials while dealing with the court cases as well as acquisition proceedings. Pointing out “intentional negligence” from each and every aspect, the committee had said the case had been “grossly mishandled” from the very start, resulting in government facing contempt proceedings. Talking to The Tribune, Sodhi said he could not comment on what the former PCC chief had written. “I am true to myself and to the state government. I have every right to claim genuine compensation for my ancestral property. I have won cases right up to the Supreme Court and have full faith in the legal system. After a miscellaneous application (MA) filed by the department has been dismissed, a review application has been filed by them. Moreover, the matter is sub judice.”

Questioning the re-determined compensation rates submitted by the office of Guru Har Sahai SDM in 2019 under the Right to Fair Compensation and Transparency in Land Acquisition Rehabilitation and Resettlement Act, 2013, party leader privy to the case said the former PCC chief in his letter had pointed out that the present collector rate of agricultural land along the link road in the village was Rs 6.72 lakh per acre, whereas the total compensation for the land acquired had been pegged by the SDM at Rs 80 crore, which had not been paid yet.

Exclusive: PS5 restock at GameStop scheduled for today – how to buy it

Democrats’ bill would give executive branch authority to declare eviction…

‘It may come at some cost’: Cabinet minister hints at deal over carbon dioxide

MTA to beef up enforcement of mask-wearing on public…

JPM, Barclays, And Citigroup Are Betting Big On Arctic Oil

How Parents of Disabled Children Navigate the School Mask Wars