Sign up to myFT Daily Digest to be the first to know about Sovereign bonds news.

Treasury prices dropped on Thursday as traders reacted to the prospect of higher interest rates, after more Federal Reserve officials predicted an increase in 2022 and the UK’s central bank said the case had “strengthened” for “modest tightening of monetary policy” in the next few years.

In the US, the yield on the 10-year Treasury note, which moves inversely to its price, moved 0.12 percentage points higher to 1.42 per cent, reaching its highest yield since mid-July. The 30-year Treasury yield climbed 0.12pp to 1.93 per cent.

Government bonds tend to fall in price when traders anticipate higher interest rates or inflation, which erode the real returns on fixed interest securities. Prices on longer-dated bonds also fall when economic expectations rise, and the Fed’s signal that it is preparing to tighten monetary policy may be persuading investors of the strength of the economy.

Markets are “getting past some of the fears about the economy being held back”, said Kathy Jones, chief fixed-income strategist at Schwab Center for Financial Research.

The Fed on Wednesday said a growing number of officials anticipate a US interest rate increase next year. Nine officials on the Federal Open Market Committee now expect an increase in 2022, according to its projections. The Fed also signalled it was prepared to begin tapering its pandemic-era bond-buying programme in November.

In the UK, the 10-year Gilt yield rose 0.11pp to 0.91 per cent. The Bank of England kept UK interest rates at a record low of 0.1 per cent on Thursday but warned that consumer price inflation was expected to rise to “slightly above 4 per cent” in the fourth quarter of the year if gas prices continued to soar across Europe. Investors are now expecting UK rates to rise by February.

“We’ve had quite a lot of news flow [from central banks] in the last two days and that’s obviously triggered some momentum towards what we’ve been expecting for a while, which is for bond yields to be higher,” said Caroline Simmons, UK chief investment officer at UBS’s wealth management arm.

Ewout van Schaick, head of multi-asset investing at NN Investment Partners, said he expected “very very gradual movements” towards tightening rates by the US central bank as it kept a close watch on the post-pandemic progress of the nation’s jobs market.

“This is a patient, data-dependent Fed that will do everything it can to aid the labour market, so long as inflation permits,” added Scott Ruesterholz, portfolio manager at Insight Investment. 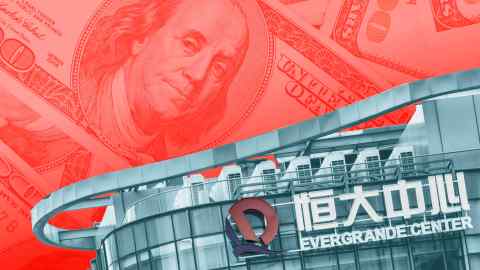 Wall Street’s blue-chip S&P 500 index closed 1.2 per cent higher, as imminent concerns eased about a potential debt default by the Chinese property developer Evergrande igniting a systemic crisis in China. The Europe-wide Stoxx 600 index closed up 0.9 per cent on Thursday.

Evergrande, the world’s most indebted property developer whose business has been hit by Chinese government curbs on lending to the real estate sector, has a payment due on a dollar bond on Thursday. Prices of its bonds indicate investors expect it to default.

Fears about contagion from Evergrande shook global stock markets on Monday. On Wednesday, however, the stressed developer said it had “resolved” payment on an onshore bond.

“The narrative has moved away from Evergrande being a systemic issue, to one where Evergrande is eventually restructured, but where collateral damage will be localised,” said Robert Carnell, regional head of research for Asia-Pacific at ING.

In currency markets, sterling gained 0.7 per cent against the dollar to fetch $1.372, while the euro rose 0.5 per cent to $1.174. The dollar index, which weights the greenback against a basket of six rival currencies, fell 0.4 percentage points.

Robert Armstrong dissects the most important market trends and discusses how Wall Street’s best minds respond to them. Sign up here to get the newsletter sent straight to your inbox every weekday

COVID-19: Travel rules have changed again – what are they now? | Travel News

Lumo: What’s it like to travel on the new cut-price Edinburgh-London rail…

Why Tesla Stock (and Hertz stock) Is Jumping Higher on Monday

If You Have an Iron Deficiency, Your Heart Disease Risk Soars —…