UK households to be offered £5,000 grants to install heat pumps


The Treasury will provide £450m to encourage the installation of up to 90,000 electric heat pumps by homeowners over the next three years as part of Britain’s attempt to hit its 2050 net zero target.

The announcement of the £5,000-per-household grant is part of wider £3.9bn funding package designed to help decarbonise the UK’s housing stock as part of the government’s long-awaited “Heat and Buildings Strategy”.

UK homes account for more than a fifth of all carbon dioxide emissions, with gas heating systems a major contributor. Boris Johnson’s administration is determined to provide incentives for people to install low-carbon heating systems, which are more expensive than traditional gas boilers the UK prime minister wants to phase out over the medium term.

Ministers will set a 2035 “target” for all new heating systems installed in UK homes to either use low-carbon technologies or use low-carbon fuels such as hydrogen. But they will stop short of announcing an outright “ban” on gas boilers in 14 years time.

Environment groups said the strategy was “inadequate” to shift the public away from gas boilers, which heat more than 85 per cent of homes. Mike Childs, head of science at Friends of the Earth, said the grants would only provide 30,000 heat pumps a year — far below the government’s existing target of 600,000 a year by 2028.

Ministers want to help the industry drive down the cost of electric heat pumps, which typically retail at about £10,000. Octopus, one of the UK’s six biggest energy companies, has said it intends to reduce the cost to around £5,500 within the next year and a half.

The government said the £5,000 grants would mean people installing a heat pump would pay a similar amount to a gas boiler. But the Energy Efficiency Infrastructure Group, a coalition of non-profit organisations and businesses — including WWF, the CBI and Eon UK — previously calculated a £6,000 grant per household would be needed to install a heat pump.

The government is also launching a £60m innovation fund to help make clean-heat systems smaller, easier to install and cheaper to run.

Kwasi Kwarteng, business secretary, said manufacturers were already making heat pumps more attractive to consumers and more affordable. “Through our new grant scheme we will ensure people are able to choose a more efficient alternative in the meantime.” 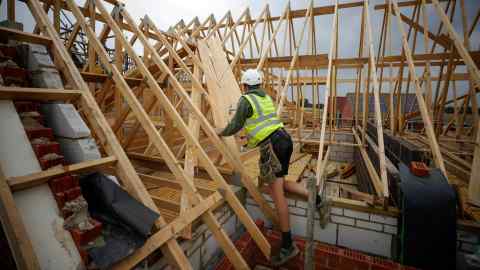 The government will also confirm it will looks at ways to shift various environment levies away from electricity bills and on to gas bills to encourage consumers to switch to electric heat pumps.

The opposition Labour party said the funding fell short of the promise in the 2019 Conservative election manifesto to invest £9.2bn in energy efficiency for homes, schools and hospitals in this parliament.

The Conservative government has previously promised £3.8bn for the Social Housing Decarbonisation Scheme and £2.5bn for the Home Upgrade Grant over the course of this parliament.

The announcements comes ahead of the publication of a broader “Net Zero Strategy” on Tuesday setting out the government’s plan for hitting its stringent 2050 net zero carbon target. The announcement is expected to include new funding for carbon capture storage projects.

Energy is the world’s indispensable business and Energy Source is its newsletter. Every Tuesday and Thursday, direct to your inbox, Energy Source brings you essential news, forward-thinking analysis and insider intelligence. Sign up here.