Could Struggle as ECB and Fed Risks Loom

The Euro-to-Dollar rate remained on course for an attempted reclamation of the 1.17 handle on Monday but will face downside risks connected to European Central Bank (ECB) and Federal Reserve (Fed) monetary policy from Thursday, which could scupper its attempted recovery.

Europe’s single currency held above the recovered 1.16 handle throughout last week despite several attempts at a corrective rebound by a Dollar that has been heavily sold throughout October amid strong pickup in investor risk appetite.

Easing concerns over an indebted property developer in China bolstered already robust performances from stock markets and commodity currencies last week, which kept the Euro-Dollar rate afloat but were enough to facilitate progress above the 1.1650 area.

“EUR/USD continues to hold steady and remains in recovery mode near term. The intraday Elliott wave counts remain positive and for now we would allow for a deeper retracement to the 1.1731 4-month downtrend. Dips lower are indicated to hold around 1.1600/1.1615,” says Karen Jones, head of technical analysis for currencies, commodities and bonds at Commerzbank.

Jones and the Commerzbank team are buyers of the Euro-Dollar rate from 1.1540 and have been looking for a return to 1.1715 where they’ve suggested that clients of the bank look to book profits on the position. 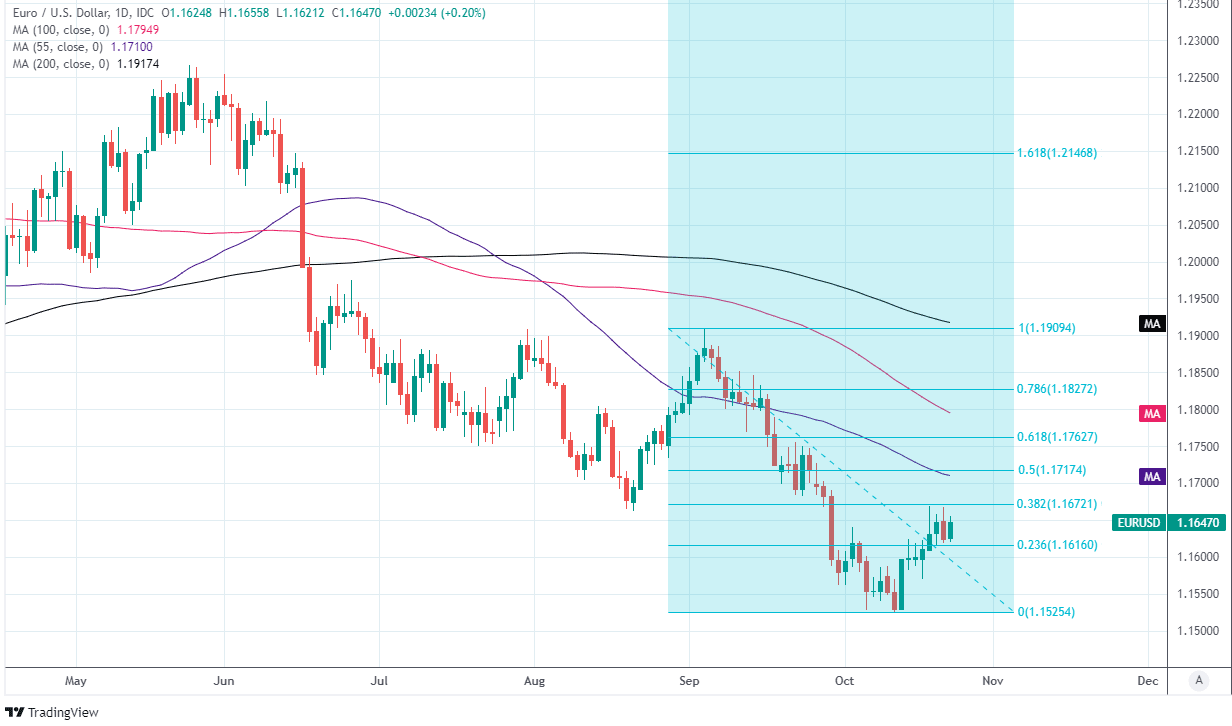 Above: Euro-Dollar rate shown at daily intervals with major moving-averages and Fibonacci retracements of September’s fall indicating possible areas of resistance for Euro.

The Euro has benefited from a supportive global market environment and a softening Dollar in recent weeks although domestic factors could be set to burden EUR/USD anew over the coming days just as Federal Reserve policy risks begin to loom on the horizon for the first full week of November.

“The highlight of the week will be Thursday’s ECB meeting. Here the ECB will be caught between; a) acknowledging that inflation risks have increased and b) wanting to push back against market pricing of an ECB hike in late 2022,” says Chris Turner, global head of markets and regional head of research for UK & CEE at ING.

Turner and the ING team flagged the 1.1670/80 area as a likely site of tough resistance for the Euro-Dollar rate.

Thursday’s 12:45 ECB policy decision and 13:30 press conference with President Christine Lagarde has gained in significance since September’s announcement because bond markets have sold off heavily.

This has liftEd government borrowing costs sharply across the world in recent weeks as investors have increasingly bet that a prolonged period of high inflation will lead many central banks including the ECB to begin lifting interest rates next year.

The problem for the ECB is that a rate increase in a year’s time appears not to be coherent with the central bank’s view on inflation and guidance on policy rates,” says Marco Valli, chief European economist at UniCredit Bank.

While inflation rates have accelerated sharply in recent months and are widely expected to remain elevated in the Eurozone and elsewhere during the months ahead, the ECB’s policy guidance all but rules out any change to interest rates until the bank forecasts inflation at its symmetric 2% target a year before the end of its forecast horizon and is confident that level can be sustained over the medium-term.

“The press conference will provide a good opportunity for her to signal that the pricing-in of a high probability of a rate hike by the end of 2022 is not in accordance with the central bank’s rate guidance. The ECB remains on course to terminate the PEPP in March,” Valli said.

Following around a decade in which inflation pressures have been too low in Europe, the ECB might be one of the least likely among central banks to perceive that an interest rate rise could be necessary any time soon, certainly in the latter half of 2022, while Frankfurt’s most recent guidance has also made clear that it would be likely to push back against any “unwarranted tightening” of financial conditions like that caused by rising bond yields.

The ECB’s current policy guidance and its historical struggle against disinflation could mean it’s highly likely to take issue this Thursday with the market’s ideas about interest rates, meaning this week’s decision is potentially a risk to the Euro-Dollar rate.

“Our short term Financial Fair Value (FFV) models, looking at short term yield spreads, yield curves and risk sentiment point to a 2% overvaluation of EUR/USD – largely because short-dated US yields have continued to…

Read More: Could Struggle as ECB and Fed Risks Loom