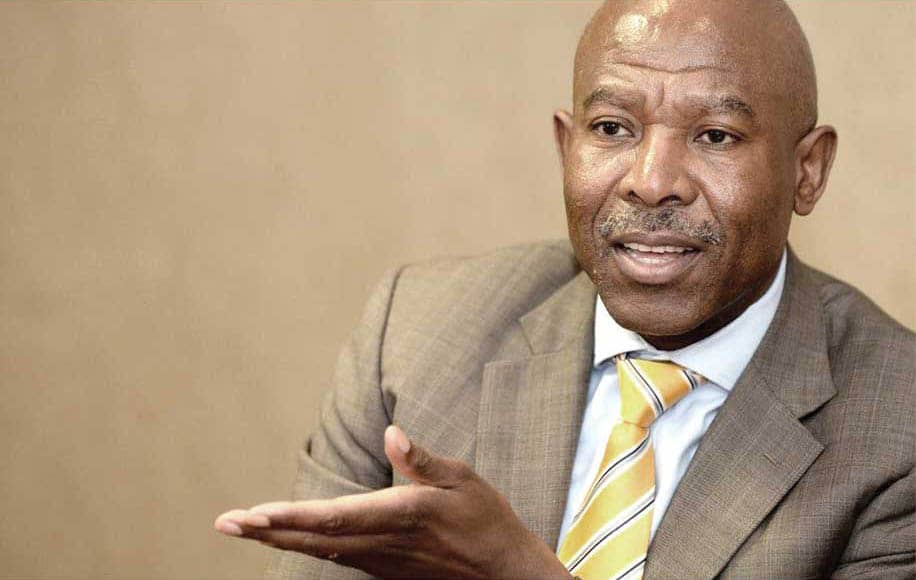 The Rand whipsawed after the South African Reserve Bank (SARB) raised its cash rate with price action coming as a strong Dollar appeared to weigh on many currencies.

South Africa’s Rand fell following the SARB’s decision to lift its cash rate by 25 basis points to 3.75% in what was a surprise decision to at least some market participants.

While the Committee expects inflation to stay close to the mid-point over the forecast period, inflation risks have increased and the level of policy accommodation remains high.

“Against this backdrop, the MPC decided to increase the repurchase rate by 25 basis points to 3.75% per year, with effect from the 19th of November 2021,” the SARB said in November’s monetary policy statement.

Local analysts had suggested that a rate rise would likely be seen and the Bloomberg consensus had shifted in favour of a rate rise ahead of the decision, although many in the international arena were of the view that the benchmark for borrowing costs would be left unchanged.

The Rand extended its earlier losses in the wake of the announcement before attempting a recovery as the SARB’s press conference came to a close.

“SARB Governor Kganyago started the press conference on a dovish note but then shifted gears and his tone drifted in a visibly hawkish direction. Among the main arguments supporting the decision, Kganyago cited that the current account balance is expected to return to a deficit next year, on top of the upside inflation risks broadly seen in the economy,” says Sacha Tihanyi, head of emerging markets strategy at TD Securities. 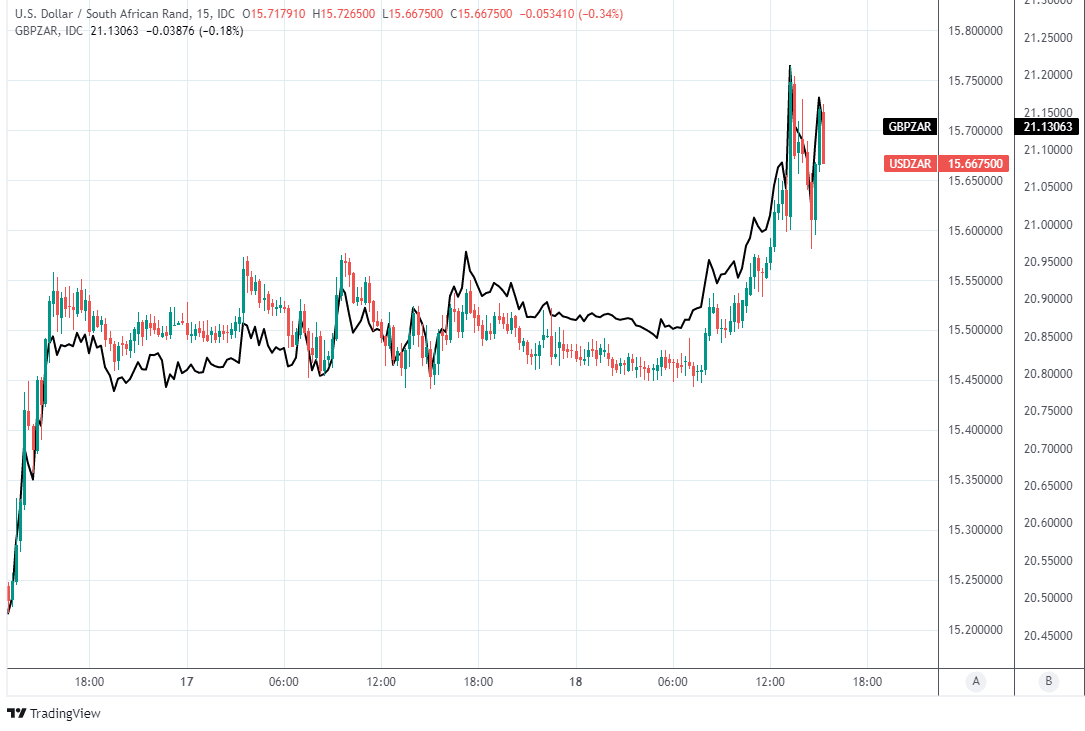 Above: USD/ZAR and GBP/ZAR shown at 15-minute intervals.

Notably in the terms of the outlook for South African borrowing costs the SARB said on Thursday that its quarterly projection model was advocating an additional interest rate rise before year-end followed by one 25 basis point increase to the cash rate in each quarter of 2022, 2023 and 2024.

These rate rises, if seen, would lift the cash rate to 6.75% over the coming years.

“During the Q&A, the Governor turned a bit more dovish again to manage expectations, and stressed out that any future tightening will be very gradual. A view we concur with. Going forward, we continue to expect a gradual pace of tightening with 1-2 hikes per quarter over the next two quarters. Each meeting will likely be highly uncertain with a close vote for either a hike or a hold,” Tihanyi and colleagues also said.

USD/ZAR had been rallying prior to the decision as the Dollar strengthened against many currencies including those with central banks that have raised their own interest rates significantly thus far in 2021, and notably those in Russia and Brazil.

The Rouble and Real were also among the biggest fallers in the emerging market currency space although neither they nor the Rand fell as much the Turkish Lira, while the Norwegian Krone and Swedish Krona were the softest among advanced economy currencies in the European noon session. 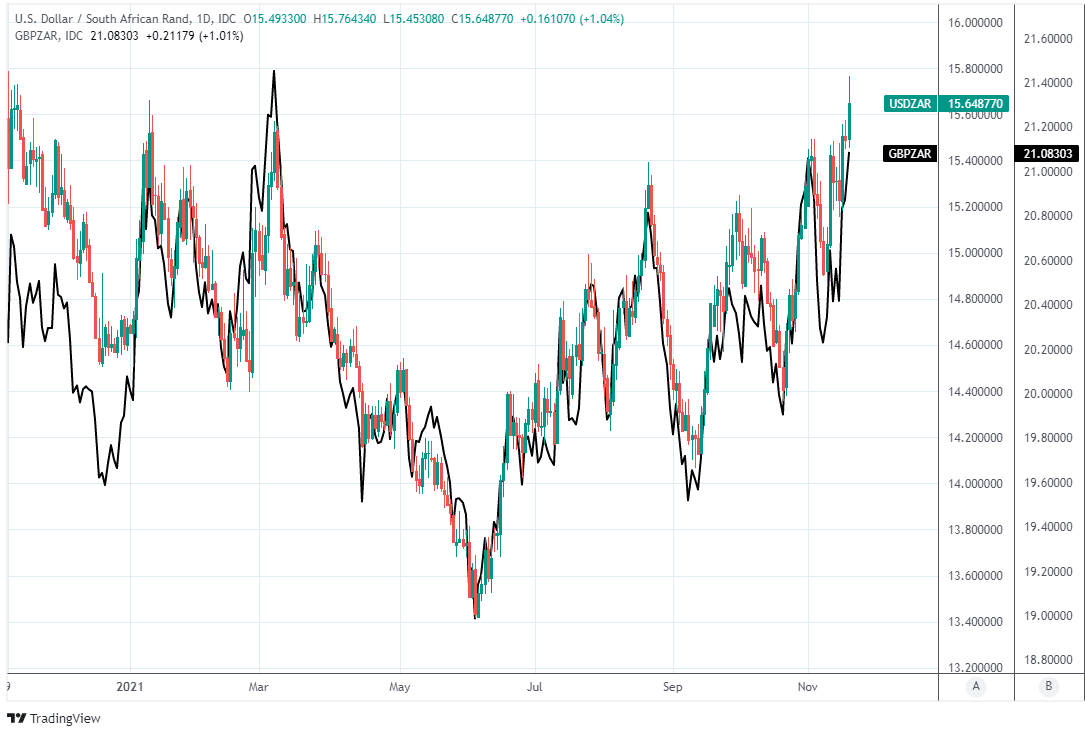 Above: USD/ZAR and GBP/ZAR shown at daily intervals.

“Things are becoming far more convoluted/challenging in the FX space,” says Jonathan Pierce, a currency trader at Credit Suisse, writing in a morning summary of the trading desk’s views.

“A ‘buy USD and shut your eyes’ approach is no longer working, as those who sold NZD in the past 24hr will testify. Our core positions are short EURUSD, long USDCHF and long USDJPY,” Pierce also said.

While the Dollar reached new highs against the Rand on Thursday, the Pound-to-Rand exchange rate hit its highest levels since March at 21.22.

Thursday’s SARB decision comes ahead of credit rating decisions from Moody’s and S&P, which are due after the market close on Friday and could impact how the Rand trades next week.

“The November MTBPS was likely sufficient to avoid further credit rating downgrades immediately, but it should be noted that the substantial fiscal slippage over 2020 has not been rolled back in its entirety. Consequently, SA cannot hope for any credit rating upgrades,” says Annabel Bishop, chief economist at Investec.

“Should Moody’s downgrade SA tomorrow this would align its rating with those of Fitch and S&P currently. This would provide an underpin of weakness to the rand, but a Fitch downgrade would likely cause more severe rand weakness,” Bishop also said.

Flat mortgage rates give buyers another day to lock in a bargain | Nov. 18, 2021

The business phrasebook | The Economist